I absolutely adore Vanessa Hudgens. She is a great actress who has stupendous legs. 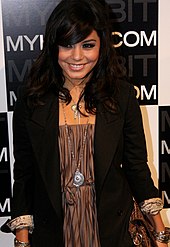 Following the completion of the High School Musical series, Hudgens confirmed that she was taking a break from her music career to focus more on acting.[38] She played a supporting role in a musical comedy Bandslam, which was released theatrically on August 14, 2009.[39][40] Hudgens plays “Sa5m”, a 15-year-old awkward freshman with untapped talents.[41] Although Bandslam was commercially unsuccessful, Hudgens’ performance received praise from critics.[42] David Waddington of the North Wales Pioneernoted that Hudgens “outshines the rest of the cast, failing to fit in with the outcast narrative and making the inevitable climactic ending all the more expected”,[43] and Philip French of The Guardian compared her acting to Thandie Newton and Dorothy Parker.[44] Hudgens made a return to theater productions and starred in the musical Rent as Mimi. The stage production ran from August 6–8, 2010 at the Hollywood Bowl.[45] Her involvement in the production drew negative comments, but director Neil Patrick Harris defended his decision with casting Hudgens by saying, “Vanessa [Hudgens] is awesome. She’s a friend. I asked her to come in and sing to make sure she had the chops for it. And she was very committed and seemed great.”[46]

Hudgens’ involvement in Beastly, a film based on Alex Flinn‘s novel of the same name, was announced in early 2009.[47] She played one of the main characters in the film, Linda Taylor. Hudgens described her as, “…the “beauty” of the story but not the stereotypical beauty everyone thinks of.”[48] Along with Beastly co-star, Alex Pettyfer, Hudgens was recognized as ShoWest stars of Tomorrow.[49] Beastly, which also starred Mary-Kate Olsen, was released on March 4, 2011. Beastly received mostly negative reviews, earning a 20% approval rating from Rotten Tomatoes from 89 reviews, with an average rating of 3.7/10. It was ranked No. 45 in The Times‘ predicted “50 Biggest Movies of 2010”.[50] The film was screened at ShoWest and it drew enthusiastic reactions from the luncheon crowd of exhibition officials.[51][52] The film went on to make $28 million worldwide as of 2012. Hudgens was also cast as one of the five female leads in the action film Sucker Punch, directed by Zack Snyder.[53] She played Blondie, an institutionalized girl in an asylum. The film was released in March 2011,[54] and grossed $19 million in its first weekend at the North American box office, opening at number two.[55] By the end of its run, Sucker Punch totaled $89 million worldwide.[56] Though the film’s content was derided, it received some recognition for the visual effects of the fantasy sequences. Sucker Punchreceived a nomination at the 2011 Scream Awards for Best F/X, and its stunt work was nominated for a Taurus Award.[57] 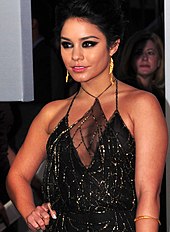 Hudgens at the 2012 People’s Choice Awards

In October 2010, Hudgens joined the cast of Journey 2: The Mysterious Island (2012), the sequel to the 2008 film Journey to the Center of the Earth, alongside Dwayne Johnsonand Josh Hutcherson, playing Hutcherson’s love interest.[58] The film earned $325 million worldwide during its theatrical run,[59] which outperformed its predecessor.[60][61] It received generally mixed to negative reviews from critics.[62][63] The consensus from Rotten Tomatoes is: “Aggressively unambitious, Journey 2 might thrill teen viewers, but most others will find it too intense for young audiences and too cartoonishly dull for adults”.[62]

In November 2011, Hudgens announced on her official website that she would be starring with Selena Gomez and James Franco in Spring Breakers.[64] The film followed four college-aged girls who decide to rob a fast food restaurant in order to pay for their spring break.[65] It was released theatrically in March 2013,[66] receiving generally positive reviews.[67][68] The film featured mature themes such as drug use, sexual escapades, and violence.[69][70][71] To coincide with the film, Hudgens later released the dubstep-influenced song “$$$ex”,[72] with a music video featuring clips from the film.[73] The song features guest vocals from YLA, and was produced by Rock Mafia.[74] Vanessa later expressed her discomfort with a sex scene in a interview with Glow Magazine stating: “It was very nerve-racking for me. I told my agent that I never want to do it ever again.”[75][76]

In April 2011, it was reported that she would star in Gimme Shelter with Brendan Fraser, a film written and directed by Ron Krauss.[77][78] Hudgens also plays Cindy Paulson in The Frozen Ground (2013), a film based on the Robert Hansen case wherein she plays as his only victim who escaped. She co-stars with John Cusack and Nicolas Cage.[79] In 2015, Hudgens took on the title role in the new production of Alan Jay Lerner and Frederick Loewe‘s Gigi, which opened at the Kennedy Center from January 16 to February 12,[80] before transferring to Broadway on April 8.[81] The production closed on June 21.[82]