Adversity has a way of making or breaking relationships, highlighting problems, and pushing couples to their limits. Now, imagine adding the pressure of being unable to walk away from someone while your relationship is under duress, or taking the space you need to think through your conflict. If you’re considering breaking up with your partner while social distancing, isolation may have lead to the realization that you and your SO are not in it for the long-haul. And you’d rather end the relationship than spend one more second listening to each other chew, even if you’re currently stuck together.

Karla, 26, tells Bustle that social distancing took her relationship from casual to serious overnight, and it ended up being a dealbreaker. “Everything was great — we were going on day trips and playing board games and meeting each other’s friends,” she says. “Then, all of a sudden, coronavirus anxiety began, and we went from getting to know each other to date.”

After a couple days of cohabitation, I couldn’t stand him.

While self-isolating as a unit sounded like a good idea at first, Karla quickly realized she wasn’t ready for a live-in partner. Instead of enjoying their company, she felt overwhelmed and annoyed, craving privacy. “It was so much so fast,” she says, “and after a couple days of cohabitation, I couldn’t stand him.”

Eventually, she decided to call things off, and the two parted ways. “Had this not happened, we would’ve still been getting to know each other and having our distance while still enjoying each other’s company,” Karla says. “There’s a time and place for everything, and this just came far too soon for such a young relationship.”

Outside of a global pandemic, any number of drastic changes to your everyday routine has the potential to become a relationship stressor — starting a new job, moving to a new place, adjusting to a new schedule. When you’re already negotiating the chaos of an overwhelming shift in your day-to-day life, small problems can feel like big ones.

“As people #flattenthecurve, we may be forced to spend considerably more time with each other,” Danni Zhang, psychologist and managing director of New Vision Psychology, previously told Bustle. “It’s not uncommon for one person in a relationship to start thinking of getting out of said relationship.” Zhang emphasizes the importance of weighing whether you’re experiencing a dead-end or weathering temporary stress.

“Coronavirus has run the gamut of emotions in our relationship over the last couple of weeks,” Danielle, 33, tells Bustle. She and her husband of five years made it halfway through the second week of social distancing together, before they needed to establish a few quarantine rules in order to keep the peace.

The two made an agreement that, at least once a week, they’d part ways and enjoy a little alone time — relaxing in separate rooms, going for solo walks, and cooking alone for a much-needed respite. “Communicating how we are feeling without judgment has also been very important,” Danielle says. “Even though we are together, having time and space of our own is necessary, and allows that time together to be more valued.”

For couples on edge, Zhang suggests listing out the reasons why you love your partner in order to shift attention away from their habits that have got you on edge. But not all couples feel the investment is worth digging in their heels. Once they got a glimpse into their future together, they were ready to jump ship — even if that only meant moving from the bedroom to the couch.

“I’m fairly certain living together too soon was what pushed us to break up,” Karla says.

One from a female reader!

The first time I ever smoked a cigarette was the night my fiancé broke up with me over the phone. After he told me he didn’t love me anymore and that I could keep my engagement ring, I hung up, went into the kitchen, and grabbed a cigarette from an open pack that belonged to my dad. I didn’t think twice — I just needed to burn something.

The end of that relationship was so sudden and unexpected that I didn’t know how to process it. So, I smoked cigarettes and started drinking alcohol excessively. Hanging out in bars and getting wasted had never appealed to me, but I had just turned 21, so I figured, why not? For a few brief hours every Friday and Saturday night, three or four Long Island iced teas could help me forget how devastated I felt the rest of the week.

“Breakups are painful — literally,” says Rosie Shrout, a postdoctoral researcher at Ohio State University who studies the intersection between health and romantic relationships. “Just like any other stressful experience, breakups can cause a psychological and physiological stress response, meaning our bodies produce stress hormones that wear and tear on our mental and physical health.”

Too often, we turn to behaviors that affect our physical health — such as binge drinking, smoking, using drugs, or exercising too much — to help cope with the aftermath of a relationship ending. We may view these behaviors as a way to get back at our ex, or we may turn to them because our inhibitions are lowered or our self-esteem has been damaged, Shrout says.

That was Penny’s* experience. The 31-year-old says she started drinking heavily, getting high, and hooking up with people who didn’t make her happy after she discovered her boyfriend had cheated on her. “Drinking and getting high numbed me, and sleeping around gave me validation,” she says.

Shrout says that while these types of responses are not uncommon, they’re also not great coping strategies. You might feel better in the moment, but these behaviors “don’t treat the emotional distress from the breakup and can even contribute to long-term health problems.”

Research shows that romantic relationships play a role in a person’s overall health — and not always for the better. One study found that people who said their closest relationships (including those involving an S.O.) were filled with conflict had a 34% higher risk of developing heart problems, even after adjusting for things like age and overall health. Another study found that people who were married and unhappy had higher blood pressure than those who were single. Researchers have also found that women who’ve dealt with multiple breakups have worse mental health than women who’ve managed to avoid heartache by staying single or sticking with their very first romantic partner.

But let’s be real: The chances of that happening in 2019 are pretty slim. We will all likely experience a bad breakup at some point. Knowing that, here are a few ways to stay healthy during those tough times.

To preserve your well-being, Joy Harden Bradford, Ph.D., a licensed psychologist in Georgia, recommends disconnecting from your former partner on social media — at least for now. “A lot of times when we’re trying to stay connected with the ex, we’re trying to answer questions that social media will not give us the full answers to,” she says. “We’re trying to see if they’re hurting as much as we’re hurting or if there’s somebody new that they’re dating.”

This can create more emotional distress than forcing yourself to let go. And, as Bradford explains, that distress can manifest in physical symptoms, such as headaches, stomachaches, random pain or tension. Thanks, but no thanks.

Working out might be the last thing you want to do after getting dumped, but exercise has been proven to reduce symptoms of depression and anxiety and increase self-esteem. “It doesn’t have to be full-blown Orange Theory every day,” Bradford says. Even a walk around campus or a few yoga poses while you binge on “Stranger Things” can be beneficial. The endorphins you get from exercise can help stabilize your mood — and yes, that’s true even when you’re convinced you’d rather spend the next six hours with your face in a tub of popcorn.

It’s not uncommon to lose your appetite post-breakup, especially if you’re really sad. The stress of a broken heart can unleash a swell of hormones and put your body in survival mode. As a result, the urge to eat becomes secondary — even a plate of authentic savory tacos from your favorite Mexican restaurant can look unappetizing. (The horror!) If that’s the case, Bradford recommends a smoothie or meal replacement shake. “Sometimes it can feel really hard to eat,” she says. “I typically will recommend people drink because that’s a little easier.”

Showing up to a party without your ex will likely raise questions, especially if you’ve been joined at the hip since day one. If it hurts too much to talk about the breakup, ask someone you trust to give people the heads up on why you’re riding solo. “When you are telling the story over and over again, sometimes you get stuck there,” Bradford says. “You can’t move on to the healing place if you are stuck in the reporting place.” Ask a friend to simply tell it like it is so everyone can move on: “Yes, they broke up, and no she doesn’t want to talk about it. How was your week?”

Allow yourself to feel all the feelings.

Everyone deals with painful events differently. Avoidance, however, is not an effective coping mechanism. “Those feelings don’t go away because we’re distracting ourselves,” says Bradford. “[It’s important to] really allow yourself to sit in the depth of those feelings, even though it sounds really miserable. There is no way for them to go away unless you actually allow yourself to experience them and then come to realize you can come out on the other side of this.”

I haven’t done one of these in a while, but why not? These are crazy! 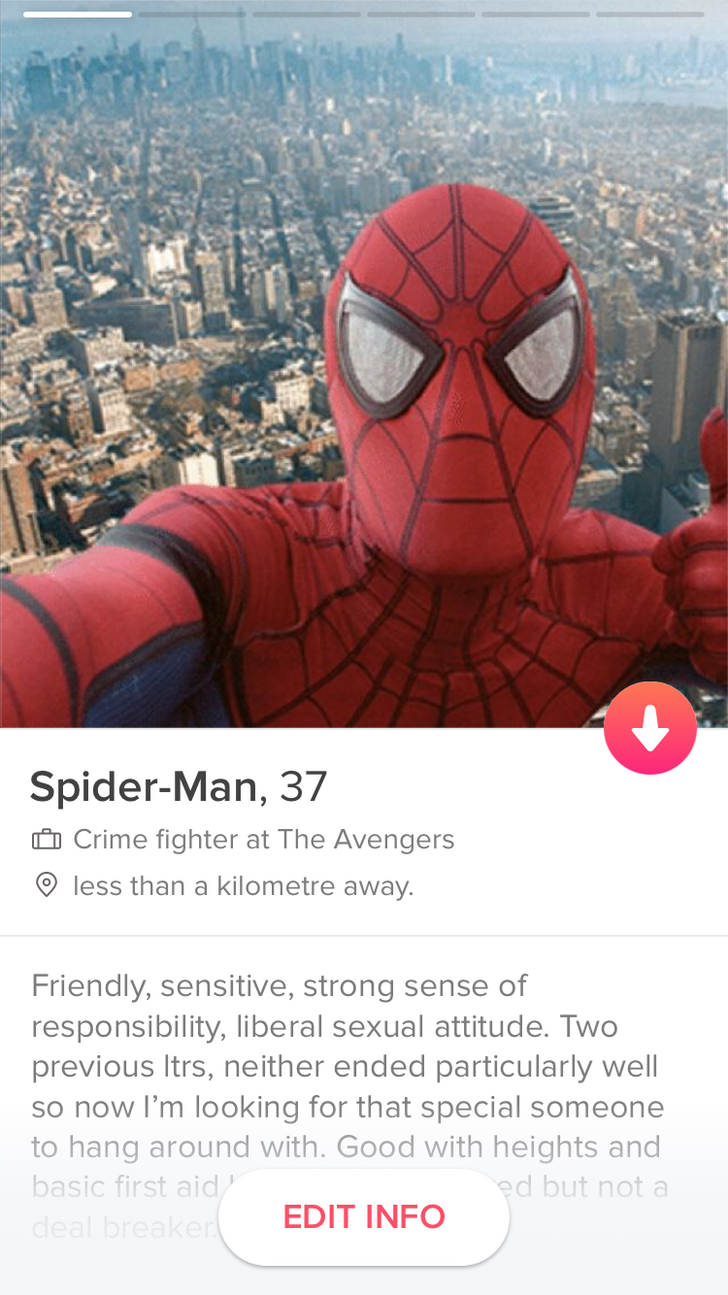 18 Strange Tinder Profiles To Make You Cringe Your Face Off

Tinder is a place where people should express themselves, because if you’re looking for a partner for sexy time, or a partner for the not-sexy-times too (which we call a relationship), you should just get it over with and show off your weirdest quirks straight away. Right?! Well that’s what these Tinder people did, and… actually maybe I change my mind. Don’t do what these people did, because people (like us) will laugh at your f*cking weird Tinder profiles. Sorry not sorry. Heh heh.