Labor Day weekend is coming up and it’s the perfect time to bond and re-kindle the fire with your partner.

We surveyed couples from all over the country to see how they would suggest spending this upcoming Labor Day Weekend, and the results made us totally jealous.

Here are our favorite romantic date night ideas for you and your significant other.

Dana and Jared of NYC said that one of their most romantic dates was when they booked a couple’s massage at the Mineral Springs resort, and spent the rest of the day enjoying drinks poolside on the roof deck. Dana’s favorite part of the mini getaway?

“It felt like we were taking a mini vacation without ever stepping on a plane!”

2. Take a trip to the Capitol.

Akanksha and Samarth recently drove out to Washington D.C. for the weekend and visited the sights.

“We went out in Georgetown at night, and then did some sight-seeing during the day,” Akanksha said. “The Smithsonian Museums are free on the weekends, so it helped us save some on the cost of the overall trip.”

Newlyweds Maggie and Javier don’t have the office leeway to schedule their dream honeymoon yet, but that hasn’t stopped them from relishing in their newlywed bliss. They recently took a sightseeing cruise.

“We’re not doing a huge honeymoon yet, so we’re taking different day trips, and I have to say I enjoyed the cruise so much,” said Maggie. “The upstairs outdoor seating was the best!”

Alyse and Dave have found that their favorite weekend excursions always include attending a music festival. “It’s how we take a break from our hectic and busy lives and take an entire day (or weekend — depending on the festival) and just enjoy each other and the music we both love,” said Alyse.

The couple is considering a trip to the three-day art festival called Bumbershoot in Seattle, Washington this weekend to enjoy some of their favorite artists.

5. Explore a new city together.

Sarah and Chris’s favorite trip together was a long weekend in Chris’s Missouri hometown, where they visited the famous St. Louis Gateway Arch and went on a Budweiser factory tour. “It was awesome to have a date night somewhere out of our normal comfort zone,” said Sarah. “Exploring a new city let us explore a new aspect of our relationship.”

While eating ballpark franks and drinking draft beer out of plastic cups doesn’t exactly scream romance, it’s definitely a fun and authentic way to spend some time together, without all of the financial pressure that can accompany a weekend couple’s trip. Anna and Matt plan on attending a Red Sox game this Saturday and spend Sunday in Gloucester for some fried fresh seafood and beautiful beaches.

7. Cozy up at a bed and breakfast.

Even though Rie and Terry live down the shore, one of their favorite weekend trips was spent at a bed and breakfast … just one town over!

“Even though we know the area, and could just as easily have eaten at the restaurants or browsed the shops in a day trip, we would usually be worrying about what the kids were doing for dinner, or if anyone would be home to let the dogs out,” Rie said. “By making a weekend trip out of one of our favorite local places, we were able to just enjoy each other.”

My new book, Phicklephilly 2  is coming soon on Amazon!

War Babies was an American rock band formed in Seattle, WA in 1988, fronted by former TKO vocalist Brad Sinsel. Although associated with hard rock, the band’s sound incorporated some elements of grunge music. They only released one album, in 1991, the self-titled War Babies.

After the break-up of TKO, vocalist Brad Sinsel and guitarist Rick Pierce (ex-TKO, Q5, Ze Whiz Kidz) teamed up for a project called Suicide Squad, aided by well-known Seattle drummer, Richard Stuverud who had played with punk rock band, The Fastbacks, and was working with the power metal band Fifth Angel. Suicide Squad released the one-off album, Live it While You Can, (1988), an EP engineered by Jack Endino, on the Music For Nations label in Europe.[1]

Shawn, Guy and Richard playing at “Under the Rail” in Seattle

After Suicide Squad, Sinsel spent time in Los Angeles but was eventually contacted by Stuverud to check out his new band, War Babies with guitarist, Tommy ‘Gunn’ McMullin. Stuverud and McMullin persuaded Sinsel to join War Babies and the band began to gig around the Seattle area, playing with popular local bands like Mother Love Bone, Alice in Chains, Soundgarden, and others. In 1990, at the time of Andrew Wood‘s death and the end of Mother Love Bone, Jeff Ament joined War Babies for a brief period before he left to join Stone Gossard‘s new band, Pearl Jam. 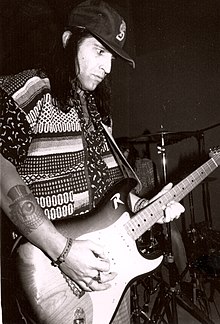 Tommy play at a rehearsal.

War Babies, featuring the line-up of Brad Sinsel (vocals), Tommy “Gunn” McMullin (guitars), Guy Lacey (guitars), Shawn Trotter (bass), and Richard Stuverud (drums) scored a contract with Columbia Records in 1991. They recorded their debut album, War Babies (1991) at A&M Studios in Hollywood, CA with noted producer, Thom Panunzio and engineer, Bill Kennedy.[2] Their first single and MTV video, “Hang Me Up”, was co-written by McMullin and Paul Stanley of Kiss. Two other singles were released, “Blue Tomorrow” (a song dedicated to Andrew Wood, who was a friend of Sinsel and McMullin’s), and the power ballad, “Cry Yourself to Sleep”, co-written by Sinsel and Stanley.[3] The song “In The Wind” can be heard in the 1992 film Buffy the Vampire Slayer but was not included on the official soundtrack.

By 1993, the War Babies’ sound was deemed too glam metal, and the band broke up. They played their last show on June 6, 1992 as part of the “Rock the Environment” benefit with headliners Queensrÿche, Heart, The Walkabouts, Metal Church, Bananafish, and Rumors of the Big Wave, among others.[4]

After War Babies, McMullin started the band The Dead Letters while Lacey and Trotter formed 8 Days In Jail and later joined Seattle punk rock band Sledgeback. McMullin has been fronting Gunn and the Damage Done for the past several years; they released their debut album, Bury My Heart, in 2010.[5]

Stuverud joined and recorded with several Seattle bands, the most notable being Three Fish, a side-project featuring Pearl Jam bassist, Jeff Ament and Robbi Robb of Tribe After Tribe. Three Fish released the albums Three Fish (1996) and The Quiet Table (1999), through Epic Records. Stuverud also contributed to Tribe After Tribe albums, Pearls Before Swine (1997) and M.O.A.B. (2007). Stuverud and Ament’s other collaborations include Tres Mts.Three Mountains (2011), with Doug Pinnick of King’s X and guest guitarist Mike McCready,[6][7] and RNDM (pronounced “random”) with singer/songwriter Joseph Arthur; RNDM issued their debut album, Acts, in 2012,[8] and followed up in 2016 with the album, Ghost Riding.[9]

Sinsel’s recent projects include American Standard with Flipp guitarist Brynn Arens who issued the “Send Me An Angel” b/w “My Only Friend” single in 2009, Americana act The McClellans, and Angels Of Dresden. The latter released a digital single, “Doomday”, via Suna Sounds [1] in May 2014, with a guest appearance by Pearl Jam guitarist Mike McCready.