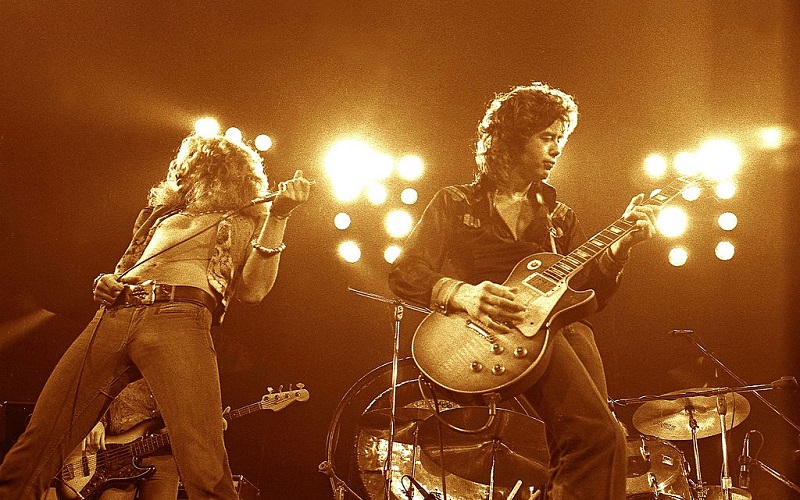 When you look for the origins of heavy metal music, you’ll always find Led Zeppelin as part of the conversation. For all the sweet acoustic ballads and experimentation the band did over the years, the constant on every album was music that got heavy and very loud.

Just ask Geezer Butler, the bass player of metal pioneer Black Sabbath. “Zeppelin paved the way for us,” Butler said. “They were the heaviest thing, up until we came along. They very much started the genre.”

On Zeppelin’s first album, you got several different types of heavy. On “Dazed and Confused,” it was the ominous type that became so popular later. Then there was “Communication Breakdown,” which looked ahead to both metal and punk thrashing.

Led Zeppelin II got even heavier, and the band never shied away from the thunder on subsequent albums. But with Presence, the record that featured almost none of the keyboards and acoustic stylings of the other albums, Zeppelin had its most metal moment.

‘Presence’ contained the metal assault of ‘Achilles Last Stand’ and ‘Nobody’s Fault But Mine.’

You don’t find tunes like “That’s the Way” or even “Babe, I’m Gonna Leave You” on Presence. In fact, you don’t find John Paul Jones on keyboard at all. Jimmy Page, who wrote the majority of the album’s material with Robert Plant, mostly kept his acoustic guitars in their cases, too.

By this point in the band’s life (late 1975), Led Zeppelin had already delivered masterpieces like “Stairway to Heaven” and “Kashmir.” They’d also closed the book on heavy blues interpretations with “In My time of Dying.”

With “Achilles Last Stand,” you got what the title promised: a seasoned warrior not leaving the battlefield before thrashing almost everyone in sight. It was a full metal attack.

Between Jones’s heavy bass, Page’s crushing riff, and the thunder of John Bonham’s drums, there was no mistaking “Achilles” for anything short of metal. Plant’s vocals are the only thing you could describe as subdued here, and by the end he too gets loud.

Then there was the unbridled assault of “Nobody’s Fault But Mine.” On this tune, Plant joins the party in style with full-throated wailing and a sinister harmonica part. Bonham’s vicious drumming on these tunes heavily influenced drummers like Metallica’s Lars Ulrich (see: “One”).

The first record from ‘Physical Graffiti’ is also among Zeppelin’s heaviest offerings.

Led Zeppelin didn’t go all-metal for a reason: They considered their music far bigger than that. They never wanted to thought of as one-dimensional. You get a good look at the band’s philosophy on Physical Graffiti, the group’s only double album.

Five of the six tracks go straight at the listener, with Page and Bonham going in for the kill on every song. The exception is “Houses of the Holy,” which obviously came from sessions for the previous album. Had you replaced that “The Wanton Song,” it would be as heavy as Zep ever got.

Of course, the second disc from Physical Graffiti dulled the blow considerably with its acoustic tunes and “Boogie With Stu.” That was the point. And even with monster rockers like “Custard Pie,” the funkiness of Bonham’s drumming stands out.

Put it this way: Led Zeppelin went metal on several occasions (especially on Presence), and metal never got that good again.